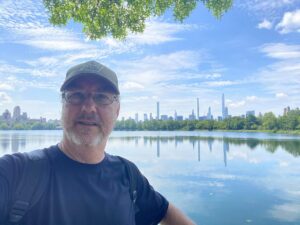 I pulled the plug on Boston, untangled myself from it, and continued to Providence Rhode Island. As I had let the day get away from me, it was easiest to camp in a Walmart parking lot because I was tired.

The next morning I ventured into downtown Providence but found nothing striking or remarkable about it. To be fair, this was unplanned and I had done no research. I took a photo of the capital and continued out of Providence, down US1 with Mystic CT in mind.

Before leaving Providence, I did, for the first time in my life, visit a Dunkin Doughnuts for a coffee. These Dunkins are all over New England and are apparently beloved by New Englanders. But, for me, I had the same feeling I get when I hear Bruce Springsteen. I know I’m supposed to like it, but I felt nothing. I found Dunkin to be unremarkable and frankly don’t see what the big deal is.

I imagined Mystic CT to be a dusty little harbor town, and recalled the movie where Julia Robert’s emptied a dump truck load into her boyfriend’s convertible because she saw him with another woman and assumed the worst, not knowing it was his sister. That was pretty funny.

I parked and explored Mystic, which is a fully developed tourist destination, not at all dusty or folksy. Very high dollar in fact. Much like Kennebunk. The kind of place where wealthy moms and daughters spend $1,000 on “cute” outfits. It was beautiful though and, like Gloucester, has a drawbridge that goes up when tall boats need to enter the harbor.

I ate lunch at Mystic Pizza, just because. I asked the younger gal “is Julia working today?” She said “we don’t have a Julia working here”. I said, “well, she use to”. She didn’t get get it.

I continued to a KOA at Niantic CT, along the coast between New London and Old Lyme, outside Niantic State Park. Took in a nice wooded hike which led to an amazing old 1930s massive venue which is now shuttered and unused, and was so even prior to CV19. It overlooks Long Island Sound and is remarkable in size, with a vast curving rear patio with incredible views. I’m sure it must’ve hosted many a big wedding and fancy balls in its heyday.

Next day brought me into the Hudson Valley where I have been camping the last 3 nights at Croton Point Park in Winchester County, on the massive Hudson River. From here I walked 1.7 miles yesterday to the Croton-Harmon train station, rode to 125th street in Harlem, and walked to 100th street from there to visit and have lunch with my daughter Caroline.

She works during the day so we didn’t get a lot of time together, but we were able to get lunch at Lexington Pizza, had a good visit, and I got to meet the roommate she and her boyfriend share their apartment with. They are all moving next month to Brooklyn to get more space, and adding two more roommates, so I may come back then.

I also hiked all through Central Park and visited the John Lennon memorial at Strawberry Fields. Then I walked back up to 125th through Harlem, to take the train back home.

The contrast between the peaceful bird-chirping serenity of the campground and the cacophony of noise that greeted me upon initial exit from the train out to 125th and Madison was striking. The walks though Harlem were very interesting.

NYC is gritty, filthy, loud, chaotic and mesmerizing. I should be NOT impressed or like it, but I do. It’s a vibe unlike anything anywhere else in the world. I can see why people like living there, but I’m not sure I’d ever want to.

I’ve also been reading/ the book “Brooklyn”, which gives a detailed history of New York City and the area starting in the 1600s. It goes deep into the history of Central Park, which allowed me to appreciate it even more.

I walked over 10 miles total yesterday, the last 1.7 back to the campsite in the hot sun and 90 degree humidity, and I was beat. But in a good way, after a great day and a wonderful adventure.

As I “type” (1 finger on iPhone) I’m at a Diner in Croton-Harmon waiting for the local post office to open so I can mail something. I have no particular destination planned today, I think I’ll wander further north up Hudson Valley, then eventually cut back East, returning to Gloucester where I’ve reserved a campground and whale watching excursion for next Tuesday.