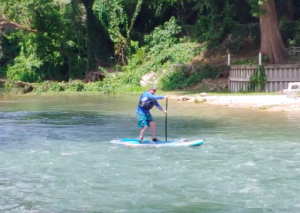 I was recently paddle boarding in the Guadalupe River in New Braunfels with a group of friends. I had my iPhone Pro 11 in my swim trunks, which, according to Apple, has a water-resistance rating of IP68. That means the iPhone 11 Pro and Pro Max can be submerged in 13 feet of water for up to 30 minutes.

I fell into the river several times over a few hours of paddling, giving the phone a periodic dunking in 1 to 3 feet of water, and it kept working fine. We were on moving water and light rapids, so everyone fell multiple times. About an hour or two afterward, my iPhone 11 Pro died.

Instead, it required some of the worst bureaucratic runaround and nightmare suffering I’ve experienced in a while, and several weeks until I finally received a refund.

I had moved on from the indignation and gross incompetence of the experience, but Square Trade emailed me a “How’d we do?” survey request today, which received 1-stars across the board. And it triggered the reminder of just how bad this insurance company is.

After 3 days of runaround with Square Trade, and living those days without any phone (which was interesting and I might write about another time), I walked into the Apple Store and purchased a new iPhone 12 Pro, along with Apple Care+ .

With Apple Care, unlike Square Trade, if my iPhone is damaged or stops working, I can just walk into any Apple the store and obtain a replacement phone under the Apple Care policy. To me, that’s worth the slightly higher cost.

As a real estate Broker in Austin, I need my phone for work. MLS Lockboxes are opened with an app on the phone, and almost all business and personal communication goes through it. So, sadly, a working iPhone has become a “must have” part of life.

Even outside the work needs, the 3 days without it was a stark reminder of how addicted I’ve become to it. I found myself constantly reaching to my front right pocket for a phone that wasn’t there.

This isn’t a detailed comparison of Square Trade vs Apple Care, but is Apple Care actually better? Not really.

Square Trade has built in “friction” with its process, which no doubt stymies many insurance customers to the degree that they never do in fact succeed in getting a claim paid. This seems intentional to me. And it is Evil. But Apple has the same set of roadblocks built into its phone and online process.

Many of Square Trade and Apple Care’s claim filing steps in fact require a working phone. For many, their phone is the one and only device they own, so this insurance would be 100% worthless to that person without friends or family to help them navigate the Kafkaesque online maze of required steps.

While writing this, I actually called Apple Care to see if I’d be able to easily submit a claim. I wasn’t. It’s just as bad as Square Trade. In some ways even more infuriating since it sold me the phone and should know that.

I pretended I had dropped my iPhone into a lake and had no access to it, and needed to use my insurance for a replacement. I logged into my apple account to start the claim while online with the rep. It texted me a “code” which would be required to proceed. I asked, “what if the phone is not operable?

Apparently, without “find my phone” working, in that case, no coverage. “Find my Phone” has to be on and working I was told. What if a thief simply turned the phone off? And you need the serial number, which most people don’t know.

You’d think that, like an Automobile VIN number, Apple would know the serial number of the phone it sold you. No, you have to know that.

The rep then told me, in that instance, where the phone was not working or is lost, one would need a friend or family member phone attached to the Apple ID account of the owner, so that the code could be texted to that number instead. There is no alternate method.

In the case of a damaged, not lost iPhone, you could in fact just walk into the store with it and get help. So Apple Care still wins because of that.

But in running these gauntlets and experiencing the intentional built-in friction of each provider, I am convinced that if the data were known, we’d find that there are a great number of people who purchased Square Trade Allstate or Apple Care phone insurance, attempted to use the insurance for its intended purpose, but were never able to do so.

I’m not a conspiracy theorist, and I’m not anti-Cooperation, but I think if the truth were know about the number of these attempted yet unfulfilled claims, there would be a great many because it’s just that hard to get it done.

And, at some threshold of uncompleted claims, you’d think these companies would see and be aware of that data. It’s a form of “shopping cart abandonment”, which is widely tracked and known in retail, and measures taken to reduce it. Why not in the case of insurance claim abandonment? You decide.