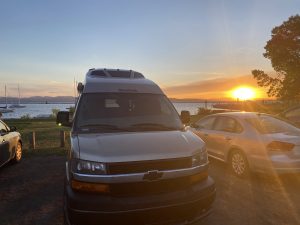 I’m checking in this morning from Camden Hills State Park in Maine. I last posted from a Burlington Vermont coffee shop the morning I arrived there on Day 8.

I spent most of that morning and early afternoon at Nomad Coffee in Burlington doing some laptop work and chilling, before visiting an REI to purchase some camping soap.

That night In Burlington I camped free at the waterfront harbor downtown in a gravel boat trailer parking area. From there I hiked all around the waterfront and into downtown.

Burlington has a downtown retail and entertainment section where the entire street has been converted to pedestrian-only, and this stretches for blocks. I thought it was a good idea as it allowed lots of space for outdoor dining and walking. It wasn’t very crowded.

Back at the harbor I took in a seafood dinner at a restaurant there, then back to the van to hang out in a grassy area behind my van, then from inside it as it got pretty cold, and watch the sunset. While in Burlington I had kept an eye out for Bernie Sanders, but did not encounter him.

The next morning I made a short journey across to New Hampshire where I had reserved a camp spot at Jericho Mountain State Park outside Berlin New Hampshire.

This was my first campground reservation thus far on the trip and it was actually a “stretch” for me to do so. Immediately upon paying and seeing the popup confirmation, my anxiety increased, and the little committee in my head started with uninvited comments.

“If it was the last remaining spot, it must be the worst one”.
“What if it’s not level enough?”
“What if you arrive to find loud obnoxious camp neighbors?”.
“What if you pass a more awesome place on the way, but already committed to this one?”
Etc.

The thing is, when scouting camp spots for the night, I prefer to see what I’m getting before deciding to stop there. Before committing.

Also, I find the reservation systems and processes for booking established camp grounds maddeningly Kafkaesque. For me, it’s actually easier to just wing it.

I mean, I can open my Amazon App, search and in 3 seconds tap and purchase a worthless consumer product delivered to my door next day. But the software talent that enables such things seem to have not found their way into the world of campsite booking apps.

Nonetheless, having just finished my third night in two different State Parks, I find the entire campground aesthetic and “vibe” to be very pleasing and relaxing.

It had tuned cold the day I arrived at Jericho Mountain State Park and had dipped into the low 40’s the night before in Burlington, It would not get above the mid-50s that day. I was able to take in a good hike, but mainly stayed in camp because there wasn’t anywhere else to go on foot.

Turns out Jericho was a popular ATV park, and I seemed to be the only one without a 4-wheel buggy of some kind. But there was also a pristine lake beach, completely deserted due to the weather, which would otherwise have been been a top notch canoeing or paddleborading spot in warmer weather. The Park Ranger told me that this Memorial Day weekend would be the coldest in New England in decades.

I left Jericho and headed to Portland Maine, and spent several hours that afternoon doing “urban hiking” along its waterfront and into downtown, and ate some “Lobster Mac-n-Cheese” at a seafood joint.

Parking is tightly monitored in Portland, and none of the stealth parking apps I use showed anything promising within Portland, so I decided to push on up Rt 1 along the Maine coast. While doing so, I saw a sign pointing to Camden Hills State Park, and decided to follow it.

I drove in and walked up to the ranger house and was greeted warmly and told “absolutely” they have a spot for me. The lady was so nice, and it turns out Maine State Parks hold a certain number of camp spots “unreservable” specifically for walk-ups, which I think is a good policy.

The next morning I got in some trail hiking, took in the view from atop Battie Mountain overlooking the harbor, then went into Camden for breakfast at a local Diner, and explored the little town and its harbor.

At the “Harbor Master” shack, I saw a flier for a “Cruising Houseboat” that one can live in and travel port to port around the world. Sort of like Vanlife on the water. It was $20K and included all creature comforts needed. I thought “Hmmm”, as the little committee in my head shouted “No!, focus on the Van travel. Step away from the flier!”. So I did.

I so enjoyed this campground and the little town I decide to stay a second night at Camden Hills. I’m no longer in a hurry. This is the first time I’ve remained in one place two nights. I think I’m going to start doing that more as I meander up the Maine Coast, accommodations allowing. But I’ve already called ahead to another State Park near Acadia and was assured I’ll have no trouble getting a walk-up spot this afternoon.

I could also have reserved one online but couldn’t figure out the online reservation system, which still baffles me because I feel I am 100% Tech-savvy in every other area of life. Yet these government run reservation systems in the camping world continue to vex me. I’ll keep practicing.

When I set out on this journey I had simply told myself I wanted to go to the “tippy top” northeast corner of the country then explore New England. Just “because”. Why not? Turns out that will be a little town in the NE top of Maine called Madawaska, Maine. That’s where I’m headed.

Then I’ll try to head into Canada, and/or spend another month or so in New England before going to New York City to see Caroline and the new Brownstone she just rented in Brooklyn. She gets the keys July 1, so I’ll be in NYC sometime and get to see her new place.
Happy Memorial Day!