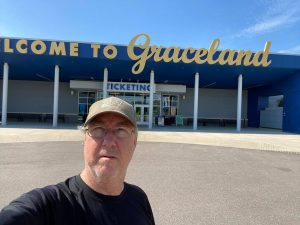 At my last check-in post I had arrived at Hot Springs AR.
That evening I hiked up “Hot Springs Mountain” to the overlook. My Strava app says that was a 445 foot elevation gain. Like walking up the stairs of a 45 story building. I could really feel that in my legs the next morning, so I looked forward to sitting in some Hot Springs.

The next morning I walked down to Quapaw Baths, which opened at 10AM – but I arrived early at 8:30AM. This “early bird” habit would surprise neither of my daughters, who were tormented growing up by my obsession of arriving early. Especially for plane flights. In this case, I’ll have them know, I was NOT the first in line as a half dozen other like-minded early birds were already ahead of me.

I’m not really a “hot tub guy” but I have to say the bath house experience was good for me. Being one of the first in allowed me to enjoy it before it filled up, as others slowly trickled in one by one. The large pool I sat in was the hottest, 105°. I could literally feel sweat coming out my pores as I relaxed and meditated.

It also served as a 90 minute digital detox, as no one had phones with them in that environment. No music. Just the echoey ambience of flowing water and soft voices. Ahhh Relaxing.

I left out of Hot Springs at around noon, and decided to head toward Memphis. I saw that there was an RV park right next to Graceland and thought it would be fun to see Elvis’ house. I also wanted to stay someplace with full hook ups to empty my holding tank.

The next morning I went over to Graceland. That turned out to be a “hard no” for me. I only wanted to see Elvis’ house. I had vague recollections reading about it, and seeing a documentary, that he had seven TVs, awful shag carpet, and that it was an interesting place. And I just wanted to see the environment in which The King lived, where he ate his peanut butter and banana sandwiches, and just soak in the vibes.

Instead what I found was a massive complex of huge buildings, his airplanes, a museum, an event center, etc.
I told the ticket lady “I just want a quick 20-minute walk-through of his old house, that’s it”. She told that is not something they offer. That the house is part of the big 3 hour tour, but cannot be viewed standalone.

Not wanting to become part of a throng of tourists, and burn up 4+ hours of my morning doing that, I took a pathetic selfie in front and left.

I then spent the entire day doing what I call a “travel push“, which is simply a long day of driving to put as many miles behind me as I can. I started to feel a strong urge to hurry up and get up into New England instead of slowly meandering there.

I left Memphis, drove north out of Tennessee and into Kentucky, and made it all the way to North Kentucky, just south of Cincinnati, where I overnighted at a truckstop. With the exception of a beautiful byway detour through some Amish country in Kentucky, I mainly stuck to the Interstate for the first time. So, nothing spectacular to report following the Elvis disappointment. Just a long day of driving.

Today will be another “travel push” day, as I’m now within striking distance of New York State. At some point “the south“ all seems fairly similar to me, so I want to get up into new environs where I can start settling into some multi-night stays instead of daily movement.So far, I am enjoying “vanlife”, and this adventure.